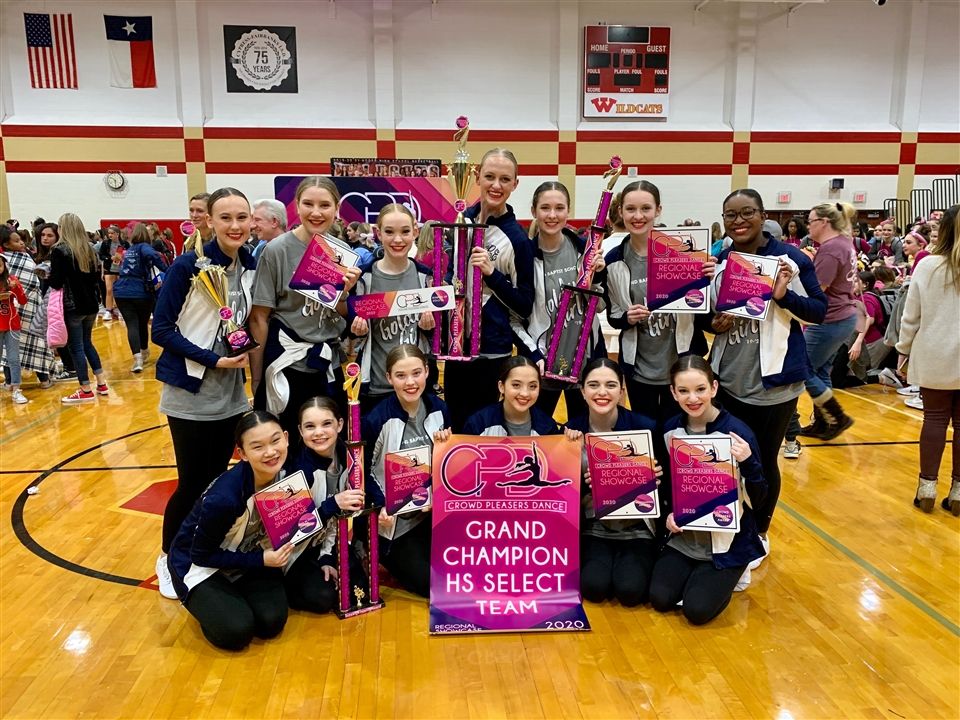 2/7/2020
This year the Golden Girls came in second place at the TAPPS Dance Championships competition in Waco. They competed against 11 other TAPPS teams in the 5A Small Squad division, which was the largest of the competition. In addition, four dancers received All-State honors. Moriah Feng ‘20 - Honorable Mention, Caroline Bolling ‘21 - 2nd Team and Caroline Carlyle ‘20 and Lauryn Edwards ‘21 - 1st Team. These athletes also qualified for Academic All-State.
At the Crowd Pleasers North Houston Showcase, the Golden Girls competed three team dances, four solos and one officer piece. Each of these routines received high marks including Best in Class, Super Sweepstakes, the “Crowd Pleaser” award and Best in Category. Ultimately taking home the fourth place slot against public high schools across the greater Houston area, the Golden Girls also earned the award for the Highest GPA of the competition. In addition, Caroline Bolling ‘21 placed third runner up in the eleventh grade solo division.
Awards are fantastic and certainly exciting, but what makes Golden Girls, and dance team, something someone would want to be a part of?
Over time, dance teams have evolved. As the athleticism has advanced, the principles of discipline, grace and hard-work remain the same. Golden Girls, and dance teams across the country are held to the highest of standards. It is an expectation that dancers arrive at practices on time and prepared to work, or suffer the consequences (50 kicks!). Every instruction is to be followed by a “yes ma’am,” and every minute is critical to achieve perfection.
According to four year Golden Girl veteran Kara Swain ‘20, “Being a part of a dance team taught me discipline and that the only way to achieve your goals is through hard work and repetition.” Dancers not only practice technique, but execute performance numbers upwards of one hundred times before it is deemed fit for a field, floor or stage.
What further makes these groups of young ladies unique is the bond that is formed through these sometimes grueling practices. “I’ve built a sisterhood with my teammates, and grown in my walk with Christ,” said Swain. Captain and four year Golden Girl veteran Caroline Carlyle ‘20 echoed Swain’s sentiment, saying, “I have never felt so much compassion from a group of girls than I have from my team. They teach me how to get through the long days and enjoy the short ones, how to lead when I am still growing as a person, but most of all how to see God in every little thing I do.”
At Second Baptist School, these young women have not only the opportunity to be a part of a team that teaches them this discipline and grace, but also about Christ. Golden Girls dance with precision, excellence and technique, for the honor and glory of Jesus Christ.
Carlyle concluded by saying, “Throughout my time on the Golden Girls, I have learned what it means to be a leader, sister and daughter of God. To me, Golden Girls is more than a dance team that performs at football and basketball games; it is a group of girls that fervently loves God and loves each other. Upon graduation, I will have been on the team since its induction in 2016, and I can say without a doubt that the dance team has changed my life for the better.”
Mark your calendars for the fourth annual Golden Girls Spring Show on April 20, 2020!
Click here to view photos from the Golden Girls competition season.
Back