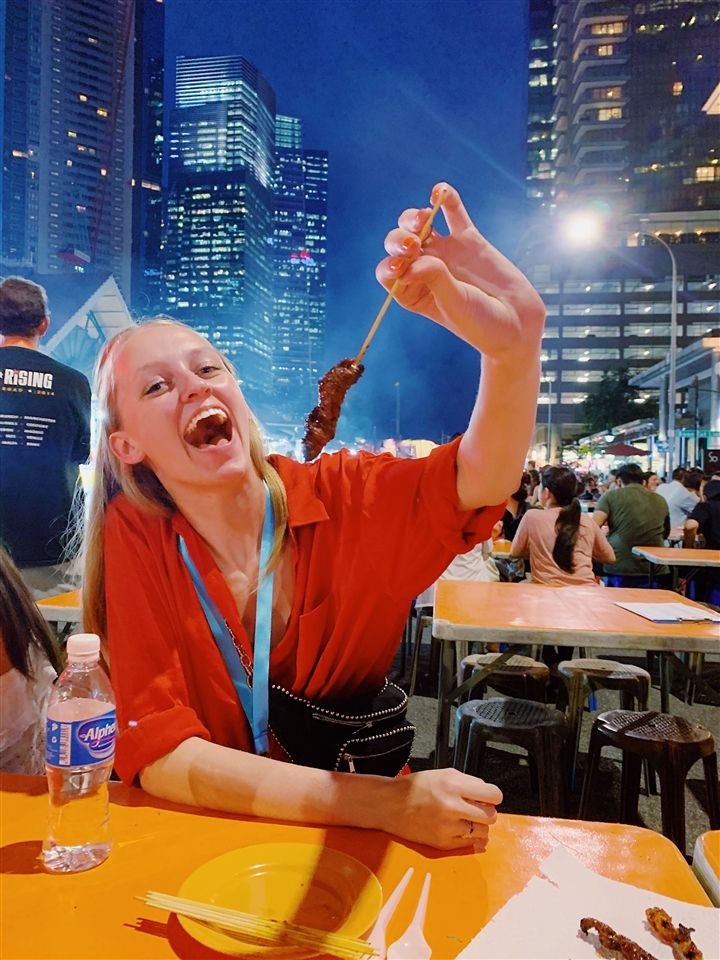 A Summer in Singapore

10/4/2019
“Established in 2011, Yale-NUS College is a collaboration between two top universities, Yale University and the National University of Singapore. Yale-NUS is Asia's leading liberal arts college that seeks to integrate global intellectual traditions, with the goal of educating young people for leadership in a complex, interconnected world.”
Caroline Carlyle ‘20 reflects on her experience abroad:
“On July 5, I departed the U.S. for a twenty-four and a half hour flight. A layover, and a few airplane meals later, I landed in the beautiful jungle of Singapore.
I had no idea what to expect. Here I was in a foreign country where the main language is Mandarin Chinese! Fortunately, I have an amazing Mandarin teacher at Second Baptist School that helped me prepare for my travels abroad.
When I arrived, I was immediately greeted by the resident assistants who took me and my new friends to the dorms at the Yale-National University of Singapore campus. After unpacking and getting to know my new friends, we all went to bed at 7 p.m. because jet lag had left us exhausted.
I was so excited to start my first day of class in Global Business and Leadership. Daily, on my 3-minute walk to class, I stopped for a coffee at Starbucks with my roommates. I typically scheduled my phone calls home around the time I picked up coffee every day since it was before they went to bed.
Each day, we were in class from 9 a.m. to 3:30 p.m. I would eat lunch in a large food court where I tried all the dumplings and traditional foods of Singapore. My friends and I spent our afternoons and nights exploring Singapore: the Merlion on the bay, Marina Bay Sands, the Night Safari and Orchard road. Singapore can be driven in its entirety in a little under an hour. I knew every inch of that island before my trip was over!
However, I was not halfway around the world for sightseeing or shopping. I was there for the cultural immersion and for my class.  One day, we took a field trip into the community near campus where I had the opportunity to talk to an elderly woman in Chinese about her move to Singapore from China. Then, I chatted with my classmates from Shanghai and Beijing, and thankfully, they said my Chinese was good! I am in Chinese V this year and I find that I am pretty well versed in Chinese.
I learned too much in two weeks to write all out; it would be pages and pages of projects, lecture notes and experiments. I learned how global business leaders must learn how to act around those from different cultures, how to build a business that is prepared for global interactions,  how to develop a team of individuals who work together to get a task done well.
My teachers brought in executives from Singapore to talk to us about how they made it in global business. One of our speakers was the former President of Sony Asia. He talked to us about knowing Justin Bieber, Taylor Swift and many more celebrities.
I was blessed to have amazing teachers equipping me. I loved meeting new people from all over the world: India, China, England, Saudi Arabia and more! Traveling to the opposite side of the world was a long journey, but what I learned and the people I met, I will never forget.”
Back